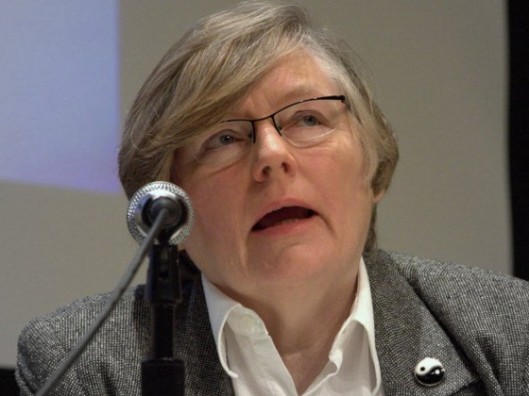 Claudia Wright has forced Jim Matheson into a June 22 run-off in the primaries.  Fun or what?  Because Claudia comes over a deal more liberal than you’d expect most Utah politicians to be.  For starters she is an openly gay woman who lives with her partner.

But, and for the genealogically minded – this is the one killer fact, she is also noted everywhere you look, in papers, or on the web, as being the great, great grand-daughter of Brigham Young.  And way out (it never gets more way out than Utah) west that’s like saying you are descended from Moses.

Because in Utah you are.

Brigham Young is the big figure in the history and mythology of the coming of the Mormons to Salt Lake City.  His name is everywhere and portraits and statues are legion.  So far so good, but does that in itself mark her for interest in a blog on oligarchical political families?  It is also certainly true that Brigham had something between 27 and 60 wives and even I haven’t a clue how many children that produced, which alone might mean a fair family vote if they all stand behind the family candidate!

What might be less clear to outsiders is that shouting “Brigham Young knew my great great granny” also means “I am an oligarch”.

Brigham Young was no misfit from nowhere who just upped sticks and moved out west.  He was a direct descendent of John and Elizabeth Howland who had come to America on the Mayflower.  This gives Claudia direct relationships to President Franklin D Roosevelt, President G H W Bush, and President G W Bush, First ladies Edith Roosevelt and Barbara Bush, Ralph Waldo Emerson, Henry Wadworth Longfellow, Florence Earle Coates, Sarah Palin (hooray I just knew I could work her in) and just to prove what a family affair the Mormons are -Joseph Smith jr their founder.

On Macadam’s Oligarch Index this lady is right up there.  That alone stands her in good stead.  Let’s see come June!

2 thoughts on “Has She The Wright Stuff?”