It’s well seeing that the election is well and truly off and running, as we enter into Convention season, at least as far as National Enquirer and Globe “Two magazines for one!” is concerned.  This week’s issue seems jam packed with knocking copy on the Democrats.

It is wonderfully, splendidly, awful stuff.

Top of the class goes to a re-run of the “Birther” controversy newly dressed up for those who have not been following Donald “Clown” Trump, and the Tea Party.

This revision is all about Obama’s Social Security Card, which is being claimed in a court case in Ohio by one Susan Daniels to have been issued in Connecticut at a time when personal appearance was required for issue – both “facts” each of which are open to question.  The picture being taken to make Obama look as much like OJ as possible thus proving Obama was born in Kenya.

Next is the bad taste article of the week claiming that Bill Clinton is in the terminal stages of something darkly secret, and about to pop his clogs at any moment whilst simultaneously terrified that the sainted Hillary is going to divorce him.  I do not believe this for a moment, as according to the likes of the Enquirer, Bill has been months away from death for at least the last couple of years or so. But then this is from a paper that actually has a “Who will die next?” column. 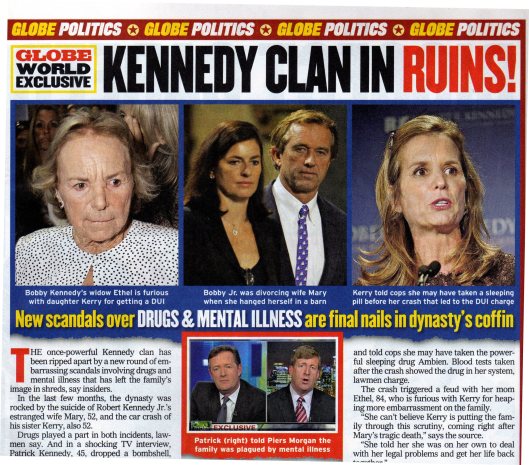 Lastly, is wonderfully nasty piece about an equally nasty family, and with the Enquirer can it ever be anyone except the Kennedys?  All wrapped In a piece designed quite blatantly to put electors off voting for Joseph Patrick Kennedy III (JP3) in the forthcoming election for congress in Massachusetts.  The Globe builds a raft of innuendo and floats it off down a river of speculation.  Drugs and mental illness, death, divorce and dental implants.  OK I’m making the dental implants bit up.

Gloriously horrible, and sure to sell well.

Yes now we are off!

2 thoughts on “Social Security Cards, and a Bad week for Democrats in The Globe”