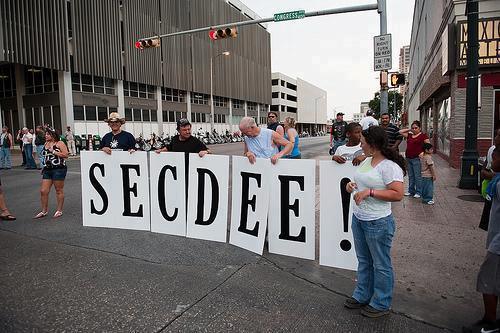 The post election latest thing is secession (and how to spell it).  It seems that the entire nation has been overwhelmed by on line petitioners striving to dislocate their states from the Federation.

Actually, States resiling from the Union is an idea long gone.  Federal supremacy was settled at Appomattox in 1865. General Robert E Lee himself ordered that the Confederate battle flag be furled and the nation reunited.

Not that that hasn’t stopped various ideas being floated in the past, like the break-up of Texas.  But nothing on this scale.  I had assumed this was just a severe dose of Republican post electoral blues aided by the internet and on-line petitions.  I was supported in this view by a relative in Arkansas telling me this morning “It’s just folks having fun”.  It didn’t seem to be a big thing there, just something to tweak the Yankees with, and raise a smile.

Clearly though it is actually upsetting the worry-warts in the press.

Bob Cesca in HuffPo was typical of a number of journos getting right hot under their cravats.  “Not only is it illegal”, he intoned,” but it’s technically an act of treason as defined by the Constitution,” he boomed “and”  attempting to add weight to it all “it was ruled unconstitutional by the Supreme Court in Texas v. White. Furthermore”, he bellows, going right over the top “the secessionists aren’t merely condemning the Obama administration, secession is by definition a categorical rejection of the United States and its Constitution, [to] say nothing of the beloved Pledge of Allegiance which specifically includes the word “indivisible” right after the word “God.” I thought these things were sacrosanct to conservatives”.

You can tell things are getting serious when the HuffPo starts bringing God into it, whilst happily ignoring the fact that the US derived its status by secession from the British Empire.

But hey, whether this is a nine day wonder or not, I can’t resist a bit of counterfactual history speculation.  What would this new confederacy look like?  Well, it seems, pretty much like the south looks today.  The most serious, and I use the term advisedly, states are:

Texas (you never know they might just do it)
Alabama (hold me up they couldn’t stand the loss of Federal aid)
Louisiana
Georgia
North Carolina
Tennessee
Florida (several theme parks, a city of old folks homes and some cattle)

All Old Confederacy and all, save Florida, solid Republican.

So what do they get?  Well, a healthy dose of Northern snobbishness for starters.  Delight oozes from every pore of the New York liberal that they can now dump embarrassments like Bobby Jindal and Todd Aitken permanently on the Blue States of America.  Hey, New Yorkers get to keep the statue of Liberty but dump Dollywood on them too.

The North thinks it gets the best beaches which is debatable as well as Hawaii.

Harvard and the Ivy League Universities remain North, Ole’ Miss goes south.  All that lovely Northern tax revenue, and the entrepreneur base stays nicely North, and the South gets coupon culture and teenage mothers, and has to work out where the shortfall is going to come from.

The New Confederacy has all the southern health problems with 88% of all obese Americans and their projected health care costs to deal with and the worst dentistry outside the third world, to which can be added, 92% of all US mosquitoes, nearly 100% of the tornadoes, 90% of the hurricanes.  It’s like an old Tom Lehrer song, all honeysuckle and pellagra.

Best of all, the Northern states get to dump off fully 99% of all Southern Baptists, virtually every last televangelist, and Rush Limbaugh.  What’s not to like? 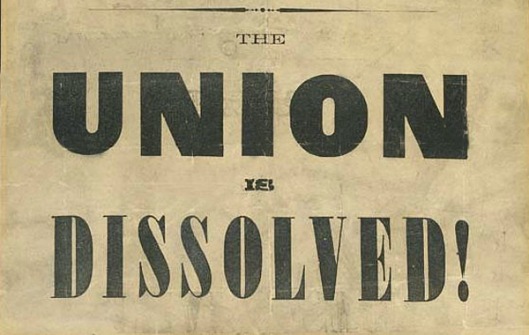 Then there are those deep entrenched belief systems.  Figures frequently quoted show 38% of those in the Red states believe Jonah was actually swallowed by a whale, and 62% believe life is sacred unless you’re talking about the death penalty or gun laws. 44% say that evolution is only a theory and one to which their Lord will not allow them to subscribe, 53% that Saddam was involved in 9/11.  All those loud ignorant comments that embarrass northern state Americans when they meet smirking foreigners are safely devolved to the New Confederacy.

All this is fine for a laugh, but in a country increasingly becoming divided, where the rich and their corporations pay little tax, and get increasingly wealthy at the expense of the middle classes, where lack of opportunity and generational loss for the poorest in society is becoming entrenched, and the all-American chances for the grafter and the talented becomes ethereal and imaginary, it bodes ill.  Politicians, and here I blame the GOP, are allowing petty games of sound-bite and party advantage to blind them to working for the greater good of their country both North and South.

4 thoughts on “Secession Now! Is Gone With The Wind”