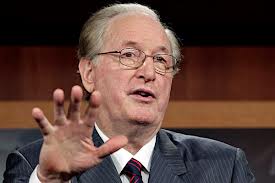 It has been widely reported that Senator Jay Rockefeller of West Virginia has decided that after five terms and three decades he is going to retire, at the age of seventy-five.  A member of America’s oligarchic gerontocracy has decided to hang up his teeth and, as he is quoted by NationalJournal, “bring more balance to my life after a career that has been so obsessively demanded by politics and public policy and campaigns…I should spend [time] with my wife and my children and grandchildren.”

The NationalJournal feels that now there is no longer a Rockefeller or a Kennedy in Congress this is a sign that the old oligarchy of powerful families and old money is finally loosening.  I would disagree, the oligarchy is alive and well in the house.

So, who was Rockefeller anyway?  This voice of the common man, this veritable tribune of the people, is the great-grandson of Rhode Island Senator Nelson W. Aldrich, and a nephew of banker David Rockefeller. He is also nephew of United States Vice President Nelson Rockefeller, and son-in-law of Charles H. Percy Senator for Illinois (which gave a connection to President Chester Arthur), and cousin of Arkansas Lieutenant Governor Winthrop Paul Rockefeller.  An oligarch to his bones deciding for you the people, what is best for you and your families. 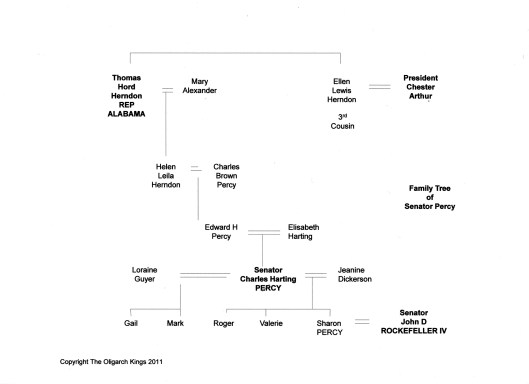 The line NationalJournal takes is that he is an old fossil of political times past, now slippling quietly away.  Well, that does not account for the sheer numbers of those in power or jostling others off the candidate list who are descendants of those who previously held high office.  Can I offer some suggestions?

The sheer number of those since the days of Roosevelt who are related to previous Presidents is astonishing.

Only last week I was commenting that Senator John Kerry a relative of Roosevelt’s, and related also to the Bushes, was being picked for the next Secretary of State’s seat following on of course from Hillary Clinton the wife of former President Clinton.  As an aside this should now be a shoo-in, as with Rockefeller’s retirement every Republican will be voting for his nomination to reduce the democratic majority.

Kennedys abound all over the place and their latest progeny still hold political ambition with Joe Patrick Kennedy III being only the latest off the production line.

As for the Bushes, this one family alone puts paid to NationalJournal’s hope.  George H W Bush’s son, George Bush, also became President, and the brother Jeb Bush is Governor of Florida and harbours Presidential ambitions even yet.  And Prescott Bush, son of Governor Bush, nephew of President Bush, grandson of President Bush, and great grand-son of Senator Prescott Bush is heading Congress side.  The oligarchy dead?  As if.

But there is more!

Senator Hillary Clinton, former Secretary of State and wife of President Clinton is a potential candidate for 2016.  Her daughter Chelsea has married Marc Mezvinsky of a Democrat political family.

Obama, despite his colour, is true solid political blue blood through his well connected mother.

And this is without getting into the endless political connections of the likes of Rodney Frelinghuysen or the sheer Oodles of Udalls that infest the west.

There is a cartel here.  Cartels are most effective when they control the supply of essential elements of the economy such as say energy or necessary utilities.

The United States has long recognised that such economic cartels, where they exercise such controls, are unfair to the customers of the good supplied, and have sought to strike down those they can reach through acts such as the Sherman Anti-Trust Acts.  However, when it comes to cartels of political influence exercising control of the democratic process, far from seeking to remove these, also in the name of their consumers – the electors – they rather entrench such cartels or oligarchies.

The NationalJournal is being optimistic.

3 thoughts on “Rockefeller: Twilight Of The Oligarchs?”