“They should keep that floor its great!”

Most people, Americans included, imagine that the White House, being the residence of the most powerful man in the world must be a seamless combination of the historic and the new.  A temple to the very epitome of taste and white-hot all-American technology.

So it would be a typical extravagance for Donald to come along all bling and bluster and insist on spending vast sums on titivation wouldn’t it?

Well, it’s not.  Far from it.  The White House as a structure is a fraud, and increasingly a creaky, smelly, fly-blown one at that.

Let me explain.  Remember back in 2012 when everyone was on about the horrible gash and mess laughingly called “The Big Dig” that had been savaging the North Lawn of the White House before finally being filled in and re-turfed?.   Clearly something very large was being inserted north of the White House, something far more than just re-laid pipes and sewers.   Speculation was that a huge bunker now sits beneath the lawns for who knows what purpose?

This caused much surprise with Americans who assume the White House is a home for the President with some posh rooms for entertaining and a few offices.   But what you imagine you see is not what is actually there.   The White House is certainly no longer the eighteenth century country plantation owner’s house it began life as.   Far from it.  Historically it’s a sham, a stage set, a true facade.

And now we have the same palaver all over again because Donald has called the place “a dump” and moved the contractors in.  Actually it was all pre-planned by Obama but why let that get in the way of a cheap dig?  He has emptied the Oval office of the Obama regime’s dog-shit brown tones, and we stand amazed at the delicate touch he has brought.

Built in the 1790’s, the house has seen some punishment and any number of previous refits, rebuilds and revamps.  At times it’s been positively parlous.

Enemy fire had burned it down in 1814.  Blame the British again perhaps, but it gave the world the magnificent vision of Dolly Madison rushing through the flames to save the portrait of Washington at the expense of her own jewels.

The West Wing burned down on Christmas Eve 1929. So, this section is a complete re-build from the thirties.

There never was any air conditioning at all.  On hot summer nights before the first World War, Taft used to sleep on the roof on a portable camp bed under a mosquito net.  Can you imagine how hoky that sounds nowadays?  Like something out of Tom Sawyer.

Indoor drinking water was not actually in place until the days of Andrew Jackson in 1833, and bathrooms were still decades in the future.  Indeed flush lavatories were non-existent until 1853.

A telephone was put in in 1877.  In a special room with its own operator as a sort of novelty.  Presidents then had lots of people to run errands with messages.  It was as late as Herbert Hoover in 1929 before the Pressie got a phone of his own on his desk.

Lack of investment, and a run of frankly amateur upgrades done on the cheap meant that by the time of Franklin Roosevelt the rooms were poky, the plumbing eccentric to say the least, the floors bowed, creaked and sagged like a ship at sea, and the kitchens were so antiquated that the major domo of the day, J B West was constantly in fear of poisoning everyone.  Limited electric light and power meant they still used paraffin lamps in parts of the house.  There were no modern phone “systems” or “telecommunications” in the house (although there was a military bunker dug in under the lawns) and all in a sweltering southern heat, this was the White House of the War Years.

It was the Trumans who finally brought the White House you tour today  into being.  And it was only because it was when they were tenants that finally, at last, the ceilings began to give way under the weight of the chandeliers.

So, an examination took place in that campaign summer of 1948 whilst the Trumans toured the States in a railway carriage.   While he was away the Presidents bath sank into the Red Room ceiling, and a leg of a piano went straight through a floor.  Investigations revealed that there were actually no supports whatsoever for the interior walls.  They simply stood on soft clay footings!  These in turn bore the full 180,000 pounds of weight of the building.  The collapse of any one of these walls would have brought the entire building down.  To make matters worse these walls had all been made less structurally sound by new doors being punched into them over the years.

Beams had split in the State Dining Room.  Old burnt timbers from the War of 1812-14 were still in situ.

On top of these walls lay the heavy old lead pipes from an 1840’s water system.  Victorian gas lighting pipes and an ancient set of central heating pipes, all added weight increasing their instability.

Further examination showed that these walls were additionally compromised by builders having shovelled any old wood-shavings that were to hand into the gaps rather than take the rubbish off site.  One spark and the entire White House would have been ablaze.

And these old walls also had to bear a third floor, and a slate roof.    It was a wonder it was still standing.

Amazingly the engineers and the Committee actually considered either knocking the entire place down and re-building using anything salvageable, or starting over building in new materials. Can you imagine a 1950’s style White House, all blond wood, Formica kitchens,  and “G” plan furniture?   Luckily Truman decided “simply” to gut out the interior.  All that was original were the exterior walls and those doors, panels, and decorative items  that could be scavenged from the building. 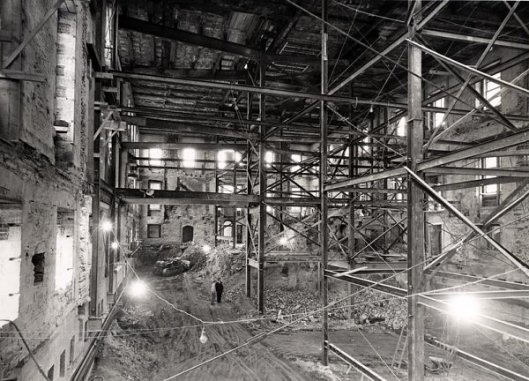 Upstairs, downstairs, no stairs at all…

They underpinned the inner walls; removed everything inside; inserted a steel frame; build two new basements; fireproofed all the new floors; modernised the plumbing, kitchens, A/C and electrics.  Truman even moved the Grand Staircase.

So the White House we see today is a historical fraud, a bogus simulacrum of the original, an architectural confection, – albeit a triumph of modern engineering.  Not that this is too obvious from the public tours!

Thereafter the White House has always been a showcase for design trends, from the Eisenhower’s mumsy tastes, through Jacqui Kennedy’s chic French influences, to today’s brisk business-like approach.

Washington is a showcase city, and has quite the strictest planning regulations.   Nothing can stand higher than the Washington Monument.   Views must at all cost be preserved, to lend dignity to the capital of the greatest nation on earth.   Not for her the glorious confusion of European capitals.   Washington is therefore a city underground, car parks, extensions and additional offices dug down all over the place to spare the views.   The Smithsonian’s Sackler gallery is mostly underground, and the National Aquarium used to be underneath the Commerce Department’s offices before its move some thirty years ago.

Thus, the old Roosevelt era bomb shelter was under the East Wing, and has been upgraded and improved often since, the Emergency Op Centre is under the lawns too, as is the Situation Room at the West Wing side.

In any other capital in the world the ever increasing need for more bureaucrats and advisors, and the offices they need, together coupled with an ever increasing appetite for electronic connectivity, would see buildings sprouting all around the original.   Think of Portcullis House in London for instance.   But for the offices of the President, the style and look of the capital city was sacrosanct, so here they dig up the gardens and burrow away like moles.  Hence the “Big Dig” of 2012 and the huge cost of $86,000,000 for this four year programme of works

In 2012 we had this new installation north of the West Wing, said soon to be joined by a mirror set of works over on the other lawn, just north of the East Wing doubtless connected by a series of tunnels.

And Donald has decided to push ahead with further pre-arranged works which include new HVAC, repairs and replacements to the South Portico steps leading to the South Lawn.

There has been a persistent problem with flies (on walls no doubt ho ho) which risk turning the place into a poundshop Halls of Beelzebub, and this will let the pest control guys in to sort that out.  They have been hanging those horrid yellow twirling sticky papers about in the worst areas for years but it wasn’t doing any good.  And then there is the smell.  Leaks and pooling water give rise to very unpleasant pongs and they hope to sort that too and upgrade kitchens and IT.