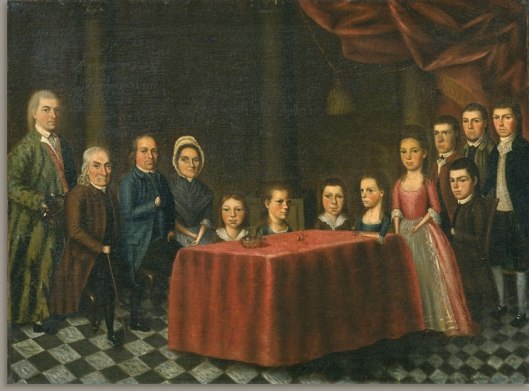 Yesterday, today, tomorrow, and for all time coming…

The questions, whilst perfectly understandable, are (I think) the “wrong” questions.  They assume that the Political Families which have bestrode, and still bestride, theUnited States stand separate, distinct, and individual.  The assumption in the questions is that the families must be different from each other, like chocolates in a box.

The truth is, that in large part the members of the political families of America, past and present, are not separate like chocolates, but form a mesh of interconnected families.  Less chocolates in a box, more a single pan of hash-browns.

In short, America has a ruling oligarchy.

So it doesn’t really matter if the name of the family is Bush, Roosevelt, Fish or Jefferson, Harrison, Frelinghuysen or Rockefeller.

Let me explain.  If you were to go (and you should) to that authoritative site, The Political Graveyard, you will find lists and lists of everyone who has ever been involved in politics in America.  You get dates and affiliations and deaths and burial sites where known.  It’s the site’s raison d’être.  Political Graveyard also lumps some of these politicians together into familial groups for ease.  The site recognises 713 such family groups, and in this we start to get somewhere.  My contention though is that the algorithms used there don’t do what I want!  Of these 713, a long tail of families only have two members each, which I don’t think is enough to count as a”political family by my definition.  If you strip these out you find you is looking at about 600 families over the history of America which have held power.  And this is not a kick in the teeth away from the 600 that Hughy Long was suggesting ruled America way back in the thirties.

The Political Graveyard site will link two, maybe three, families where there are close connections such as, oh say, Bush, Walker, Mercer.  My contention is that the connections are more complicated than that.

Let’s look at the very beginning.  When the constitution was being decided, the country had an already immensely well connected and interlocked oligarchy of families of landed southern aristocracy and northern merchants   This was especially true inVirginia which was the most economically developed of the thirteen states.  The north had descendants of the original Dutch rulers mixed together with Mayflower families.  So, these post Washington Presidential families came from two principal nests of oligarchs – the Mayflower descendants in the North, and the James River Settlements in the south.  The new, post constitutional, President was to be elected from within this group.

Sixteen of the Presidential families (post Washington) arrived before 1677 and fully a dozen arrived before 1640.  Indeed, the only Presidents whose families were not already established before the Declaration of Independence in 1776 were Buchanan, Arthur, Wilson and Kennedy.  Surprisingly, for all that he plays on a Kenyan father, this also includes President Obama.

None arrived after the Civil War of the 1860’s.  Yet it was after the Civil War that the great flow of migrants came.  The greatest flow and maxima year for immigration was as late as 1907 and not one child of their number has yet sat in the White House.

Now, the standard view of this early closeness in the relationships of the post Washington Presidents would be that this is just what would be expected in a country with only a small educated elite to draw on.  But as I have shown in my posts regarding the ten Presidents of theUnited States before Washington, in “The Forgotten Presidents of the Confederation” and following posts, these were genealogically a far more mixed bag of people than those that follow.  Something happened at the time of the making of the Constitution that closed the door on “ordinary” people becoming Presidents.  Certainly these figures who had played such a big part in the Declaration, and the War of Independence – even those who had been “signers” of the Declaration of Independence – disappear from the story of the Presidency.  That “something”, this blog contends, is the sudden control of the oligarchy, in what amounted to a Palace revolution or putch. 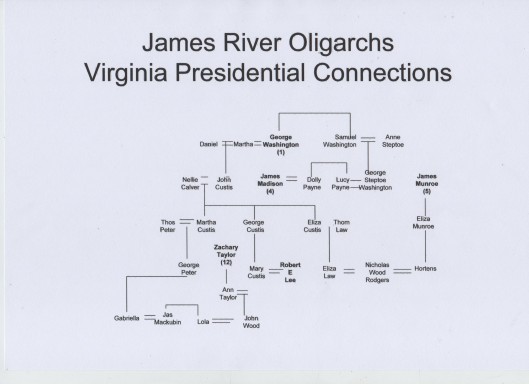 This tree shows what is conventionally termed the “Virginian dynasty” showing the tight control of the families of the early Presidents which was said to come to an end with President Jackson.  It didn’t, it just went quieter.

Here is the tree showing the oligarchical connections of the two Harrison Presidents and a large number of other luminaries. 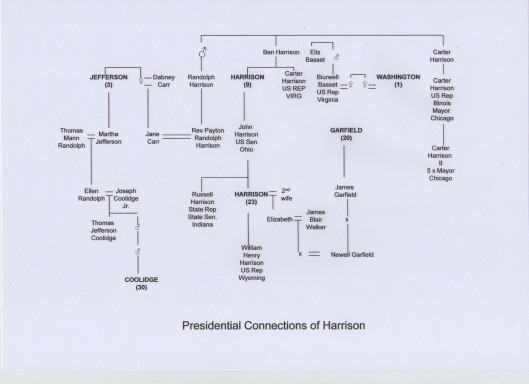 And finally, let’s look at the oligarchy of those families who do not rise to be Presidential, but who exercise control across time and space.  Think of these people and families as the “dark matter” in the political cosmos binding the political universe together but being unseen because the brightness of the Presidential suns blinds us to their presence.

Stuyvesant was a Dutch Governor of New York even before it became British, far less part of independent America.  This tree (and it is significantly simplified and reduced to make my point clearer) is only one of several that can be drawn up.  These people have been dug deep into power for nigh on four hundred years. 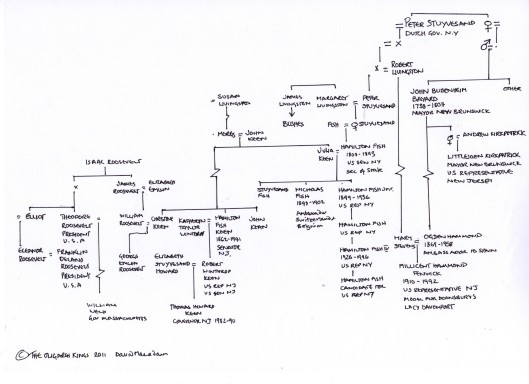 So we see that it is not really a matter of one particular family, or another family.  It’s the fact that so many families lock together to shut out competition that defines so much of American political life at its highest levels.  Sure, some truly outstanding candidates like a Reagan or a Clinton can occasionally break through to the highest offices, but only if an oligarchic candidate is not on offer.  Indeed to make matters worse, they all come cut from more or less the same genealogical cloth.  They do not represent the amazingly diverse hodge-podge of backgrounds that the American people come from.  They are, in short, not representative of the people they speak for.

The United States has long recognised that economic cartels, where they exercise similar controls on goods or services, are unfair to the customers of the goods supplied, and have sought to strike down those they can reach through acts such as the Sherman Anti-Trust Acts.  However, when it comes to cartels of political influence exercising control of the democratic process, far from seeking to remove these also in the name of their consumers – the electors, they rather, entrench such cartels or oligarchies.

10 thoughts on “The Noble Families of America”